The "Moosing" Of Kristina K

SO, back to what I really wanted to write about this morning.

It seems the cocky NSW Liberals have taken to calling Premier Kristina Keneally "the moose" and this has the Sydney Morning Herald's state parliamentary reporter Sean Nicholls groping for an explanation. Now there is always a reason for a nickname. People do not just pluck random words out of thin air and pin them on other people, especially when they are public figures, and Nicholls tries very hard to come up with a rationale. If you take his word for it, Keneally has been "moosed" because she reminds former British soldier Mark Neeham, who is now a top NSW Liberal, of the one-time and short-lived Canadian Prime Minister Kim Campbell, who was in office for just a few months in the Nineties before losing the election and her seat.

Nicholls really digs to make his case -- digs too hard and far too deep, if you ask me -- by noting that the Canadian PM's official residence is on Sussex Street, which is also the name of the street in Sydney where the Labor Party has its headquarters.

Top marks for effort, Sean, but you did not need to work up such a sweat. The real reason the Liberals are using "moose" and chuckling about it is because it is a flat-out sexist obscenity commonly used to describe female genitalia. Here's one example:

I like girls that can cut a rug...I'm talking no stubble, just a freshly shaved set of moose knuckles.

Or look at how it is used in the caption to this this picture: 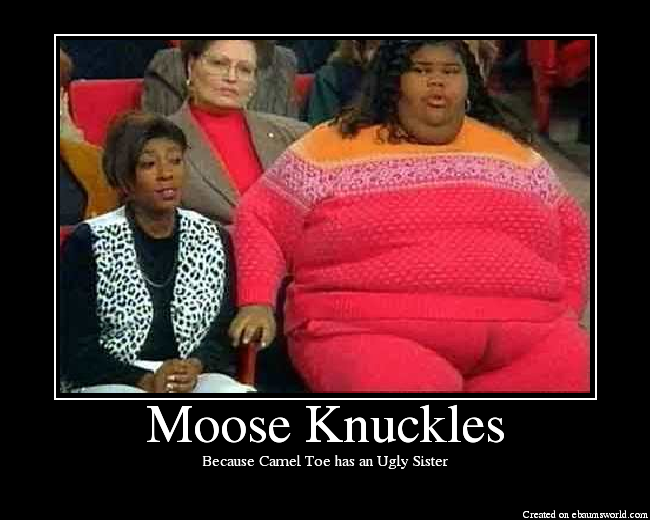 It gets worse, much worse.

The Urban Dictionary cites the common use of "moose" as a synonym for the female genitals, which Premier Keneally, being an undoubted woman, obviously has. She is also from North America, although not from Canada (sorry Sean), so if you are a troglodyte, knuckle dragging NSW Liberal whose background is in a macho military force, the moose allusion must have come to mind in a millisecond.

After that the sexual association came next, and even more naturally. The sort of barrack room banter that Liberals obviously trade when they think no one will understand their private jokes also embraces racism. The examples I feel obliged to present below are not pretty. Indeed, they turn my stomach as I copy them from the Urban Dictionary, but NSW voters need to know just what sort of people all the polls say will be running the state in a few short weeks:

Moose Pussy
A.) A large, canyon like vaginal cleft, sometimes the result of copulation with a large rubber fist.Usage: Damn! you could park a hummer in that bitch's moose pussy!

B.) A vagina that is extremely loose, usually on a woman that has been screwed a lot by black people.Useage: Ugh I bet that bitch has a moose pussy, she got fucked by big nig, three times.

The question now is what we can do about this. It seems to me that the women of NSW want to know if the men who are confidently anticipating the regressive havoc they are about to inflict on the state can be trusted, and that starts with the Sydney Morning Herald getting its facts and its explanation straight.

I intend to send Sean Nicholls an advisory note. If you can think of anyone who can raise awareness of this anti-woman filth, please pass a link to them.

If we can start a backlash, generate a storm of protest and get some opinion articles in the press, it might still be possible to save this election for Keneally and the progressive movement.

Alene
I am an unremarkable person. For many years I worked in one of the caring professions, helping clients access benefits and a measure of natural justice. About 15 years ago my partner walked out, plunging me into depression that eventually lifted but led to a legacy of agoraphobia and panic attacks. I seldom leave my home as a result but, thanks to the Internet, I can stay informed and, from the security of my writing room, can put words together that might just help to make this world of ours a better place.